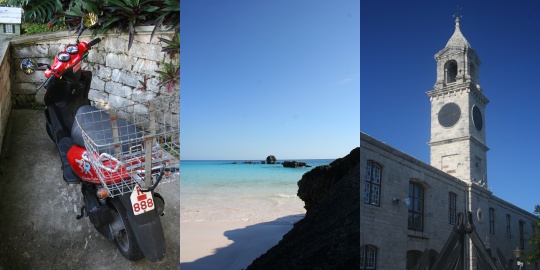 And once again, I have ventured into work in order to keep people up to date on my life for some reason. Perhaps it is related to my need to check in with the world outside Bermuda now that I have a full appreciation for just how small it is. Today was my day of the scooter, at least my first day, I can’t say how many more there will be in the future.

I will start off by admitting that I was pretty nervous about the whole prospect of biking around the island today. Fortunately I have been here for a month now and have a pretty decent feel for how the traffic works. Surprisingly driving on the left hand side seems natural after witnessing it so much both on the bus and driving with other people. My biggest problems were learning to take the corners smoothly and every once and a while getting off the road to let the line of cars go by. The latter wasn’t really a problem just something to bear in mind since apparently everyone on the island speeds.

I started out heading west on Berry Hill Road and then south toward the appropriately named South Road. As I was starting out, I passed a bus stop in which a chicken was just standing there. I had to laugh to myself thinking that it looked like the chicken was waiting for the bus. I followed South Road the whole length stopping a couple of times along the way to take photos. Once at Elbow Beach, which was when I first realized just how hot it was out today. And of course I’m wearing jeans and my jacket in an effort to stay safer on the bike, but it all made for a toasty experience whenever I would stop. Continuing along South Road, I would stop occasionally at scenic look offs to enjoy the view and to allow traffic to flow. I stopped again at Horseshoe Bay, which is perhaps the most famous beach on the island. I was beautiful and many photos were taken. The middle shot from the combined photo above was taken there. I was probably at the beach for at least half an hour and definitely wished I had brought a swimsuit or shorts or something. I settled for a casual stroll in sneakers across the white sands instead.

Leaving, I continued westward until South Road meets Middle Road and took the latter still heading west. At this point Bermuda starts to really curl around to the north and back on itself in what is a bit of a fish hook shape. I drove all the way to the tip of the hook, Dockyard. As the name suggests, Dockyard was a Royal Navy Dockyard for many years – Britain’s largest outside the UK – until 1951. Now it is a tourist attraction and contains many shops and restaurants. It is one of the spots on the island where cruise ships will berth. Wandering around for a bit I took some more photos. By this point, I was starting to feel a bit sun parched. Having come as far in this direction as I could, I turned around and headed back through Bermuda.

I traveled past the Somerset bridge again, which is the smallest drawbridge in the world. This time I stayed on Middle Road until I started to get close to where I was living up until this past week and I stopped at my usual grocery store for a few heavier items that would be easier to get home by scooter. Since I was very near Kieran’s place, I decided to pop in and say hello. I relaxed there for a bit and then headed towards home. I took Harbour Road which was more scenic but more twisty, forcing me to practice my corning skills. Once back to my house, I was toast. Like every other adventure I’ve had outdoors in the past, I found myself drained due to my lack of exposure to the sun on a regular basis. I know one thing. I’ll sleep well tonight.