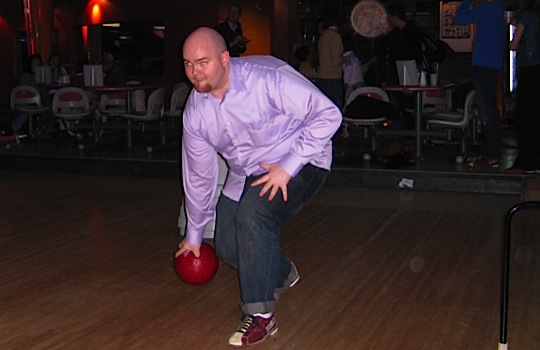 That is the progression of me getting better at bowling throughout the night. This was ten-pin bowling mind you, which I have never played before. Those bowling balls are quite heavy. I actually learned a lot about bowling in the past couple of days in the process of planning this last event out with my coworkers and friends. Apparently the most common type of bowling in Canada is five-pin bowling which I have never played before. As the name suggests, it uses five pins and a smaller ball. There are other slight variations on the rules but otherwise it is similar to the full ten-pin which is most popular in the US and UK. While the five-pin is the most dominant form in Canada, in Quebec, New Brunswick and Nova Scotia it isn’t. In Quebec it is Duckpin bowling and in NB and NS, it is Candlepin bowling. Given that growing up, the only place that I’ve ever bowled was in either Nova Scotia or New Brunswick, you can see why I’ve never played five or ten-pin.

And the rules of Candlepin are different enough that I would have been quite confused as to the rules of ten-pin but for the training I received from the Nintendo’s Wii Sports. I’ve played that bowling, in fact I was playing it the night before, which uses the ten-pin rules. So I knew that there would only be two balls per frame. What I didn’t realize, since in the Wii version I assumed this was a function of being a video game, was that after each ball, the fallen pins are cleared. This is not the case in Candlepin where fallen wood can be quite helpful in getting awkwardly arranged pins down. Apparently Candlepin is much harder, which I might agree with because I don’t think I’ve ever broken 100 in Candlepin, and the highest sanctioned score ever was 245 out of 300.

Enough about bowling though. It was a great afternoon and evening with way too much food had by me anyway. Pizza in the office–way more than we needed–and then the need to by food with our drinks at the bowling alley. Of coursed being stressed out about my move, I consumed more than might be considered wise. However, the evening was amazing. Good friends, good times. I will miss the Vancouver office so much. I feel that part of my being is in those… cubicle dividers… :). I watched it grow, and along with it, the number of great people I am happy to call friends. Jordan, Reza, Ken, and Pero, I will miss our weekend excursions and lunches. At least now you will be able to add more seafood and sushi into your rotation. Of course, I will still be in close contact electronically, but it isn’t the same. All the best.